Many trips are made every year to this area to study the rich geological history of the area. This article has been written for us to help visitors understand what happened here millions of years ago. Torbay has the most interesting geology for miles around. The Jurassic Coast offers length and lots of fossils, but Torbay has been used by universities studying geology for many years because of the greater age of its rocks and the fascinating way the rocks lie in relation to one another. 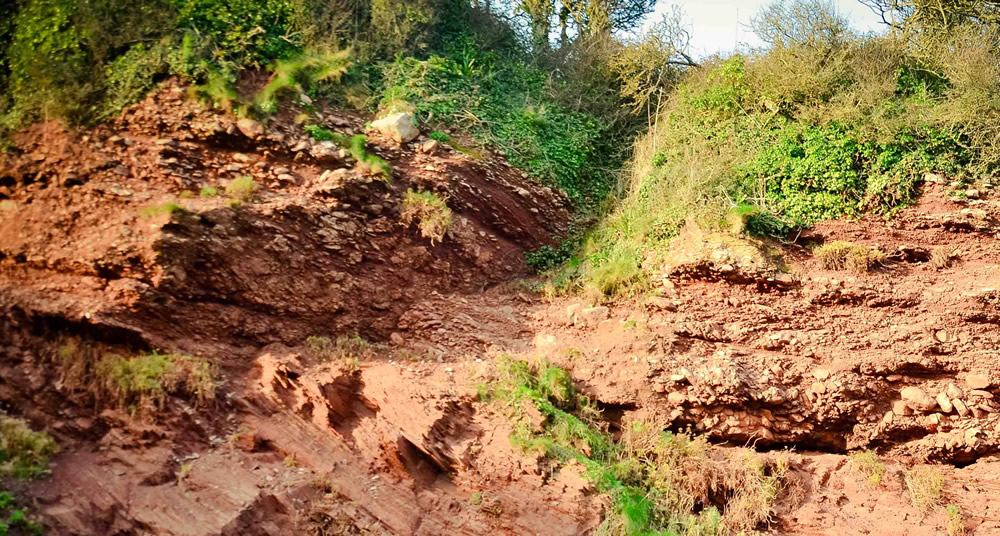 The oldest rocks in Torbay are red/ brown weathered slates and grits. These rocks are not seen much at the surface although there are one or two outcrops along the beaches e.g the small headland separating Goodrington North and South Sands. In some places they became so rotten that they were reduced to clay, the material of which they were originally made, deep on the floor of an ocean. At one time this clay was the raw material for a brick works in Paignton, at a place which even today is called Clayland Cross, on the Ring Road at Paignton. It is an interesting thought that many houses in Paignton are built from bricks which came from 380 million year old ocean mud. These rocks belong to the lower part of the Middle Devonian period.

Middle Devonian refers not to the place but to the age. The Devonian period lasted from about 395 to 345 million years ago. It is called Devonian because Devon was the first place that these rocks were studied in detail.

Limestones are amongst the oldest rocks in Torbay. They too belong to the Middle Devonian period but are slightly younger than the slates and grits described above, This limestone is a hard grey rock which is resistant to erosion and forms the two arms of the bay at Torquay and Brixham ( Berry Head). It is about 360 million years old and started its life as corals growing in a shallow tropical sea. Gradually the sea got deeper and the corals died and more corals grew on top until there was a huge thickness of their remains. Gradually the calcium carbonate of which the corals were made became dissolved and cemented with other chemicals to form solid rock. This rock is now hundreds of feet thick. In spite of this dissolving process there are many places around the coast where the erosion of the sea has picked out the outline of the fossil corals such as the headland between Broadsands and Elberry Cove.

Limestone is full of joints or cracks. Even in times past the rain was acidic and it dissolved the limestone around the cracks through which it was running. Over many tens of thousands of years these cracks became huge caverns, which during the ice ages became the home to many prehistoric animals and early man. A trip to Kent?s Cavern is a must if you want to see the prehistoric discoveries and huge caves. There are also well known caves at Brixham and Buckfastleigh

The limestone contains surprises such as a small deposit of gold that was discovered in the lower cliff at the western end of Meadfoot Beach, In addition there are numerous deposits of iron ore and umber lying in pockets within the limestone. Iron ore in the form of Haematite was worked at Sharkham Point Brixham and the produce sent to South Wales for smelting. The umber was the raw material for high quality protective industrial paints manufactured at Brixham in the late nineteenth century. The Tor Bay Paint Co. commenced manufacturing at Fresh water Quarry, Brixham, in 1895 and amongst other contracts the paint was used on the Victoria Falls bridge in Africa. Umber is a rich yellow/brown mineral itself a type of iron ore.

The coral sea in which the limestone was deposited was dotted with volcanic islands. There are small quarries particularly around Totnes where there the hard volcanic (igneous) rocks have been extracted for road building. In addition there are places where you can see where volcanic ash has been incorporated into the seafloor mud such as the northern arm of Saltern Cove at Paignton.

Gradually the sea deepened, the corals died out and mud was laid on top which eventually became Upper Devonian slate.
To understand more about our local geology you must understand that rocks move around over the surface of the globe pushed around by convection currents of hot semi fluid rocks rising and falling deep within the earth?s interior. The Devonian rocks were originally in the tropics of the southern hemisphere so you can imagine tropical islands with warm azure waters with water getting deeper as you went south and getting shallower towards a desert shore as you went north.

More rocks were laid on top of the Devonian (the Carboniferous rocks which you can see in North Devon and South Wales), but all these rocks became forced up into mountains chains as the Earth?s crust was crumpled as one part collided with another. The mountains may well have been higher than the Himalayas and it was during this time that the granite of Dartmoor welled up from beneath as a molten rock and formed a core rather like the root of a tooth.

Over many millions of years these mountains were worn away by the weather and deserts formed around them. One of the most fascinating aspects of the geology of Torbay is the rock laid down on the desert floor. You have to understand that by this time the Torbay, as we know it, was at about the latitude of the Sahara and very hot. Periodically there were flash floods bringing down huge quantities of rock debris from the mountains.

This debris was washed out across the desert floor through valleys that today we call desert wadis. This was the era of the early dinosaurs and geologists refer to it as the Permian period (270 to 225 million years ago). It is doubtful whether the giant reptiles ventured far into the desert and certainly none of their remains have been discovered in the rocks of Torbay. What we know however, is that most of what today is South Devon was covered by these desert rocks, some of it sand dunes and some of it rock debris which we call Breccia (pronounced ‘Brechia’).

You might wonder how we know this since there is’nt a lot left! Well one of the things you are almost bound to have noticed driving around South Devon is how red the soil is. This colouration is due to iron chemicals only found in deserts. The chemicals were leached out of the overlying desert rocks and it passed down into the Devonian rocks beneath, staining them red. Eventually most of the Permian rocks were worn away leaving the stained Devonian rocks exposed. The Devonian slates weathered to become the red soil (You may have noticed that normally white sheep become pink grazing in the fields around Torbay!!). Paignton is built on a desert although thankfully the climate is not as hot as it was when the rocks were originally laid down.

I really recommend you go and have a look at the breccia of Roundham Headland at the North of Goodrington Sands. You can see the desert sands enclosing sharp pebbles of Middle Devonian limestone washed down from the mountains. By studying the tilt of the pebbles we can work out the direction taken by the flash floods as they tore across the desert landscape. If you go to the small cove just north of Saltern Cove at Waterside between Paignton and Churston you will actually be able to put your hand on the original desert floor because here there is what geologists call an unconformity where the desert rocks are lying directly on the Devonian rocks underneath, separated from them by a period of about a hundred million years.

Throughout its long geological history Torbay has suffered many thousands of earthquakes, some of them tearing the rocks apart by many tens of metres. Today the earth quakes are rare and very minor. There is a big tear in the crust running from North Devon through Bovey Tracey and out into Torbay near Tore Abbey Sands, but it only moves a tiny bit and then only on average about every ten years: so you’re quite safe! However the scars of these earthquakes are all over Torbay and this is what makes the study really interesting for the geologist. The tears or faults as they are called, mainly within the Devonian, cause great complexity within the rock structure. When one rock shears past another the rocks often become highly distorted and sometimes their chemicals recrystallise as new minerals such as calcite. You will see a lot of evidence of this between Broadsands and Saltern Cove.

Sea level rise is no new phenomena. It has happened countless times in the past as has the sea level falling. In fact only tens of thousands of years ago (a very short time in the history of the Earth) Torbay had no sea in it at all and the coast was way out beyond Berry Head. In fact Torbay was a wooded valley reaching down to the coast.

You can see the remains of the prehistoric woods at Goodrington at very low tides when the stumps of these fossilised trees become visible at North sands.

Fossils of fossil corals are the most common types of fossil in Torbay. The Upper Devonian slates do sometimes yield small shell fossils. Very primitive fish have been discovered as fossils in the Lower Devonian.
Torquay Museum has a worthy collection of fossils and prehistoric remains recovered from the limestone caves of the district by a notable local Victorian collector; William Pengelly.
Author and Copyright. Robert Vaughton. All rights reserved.