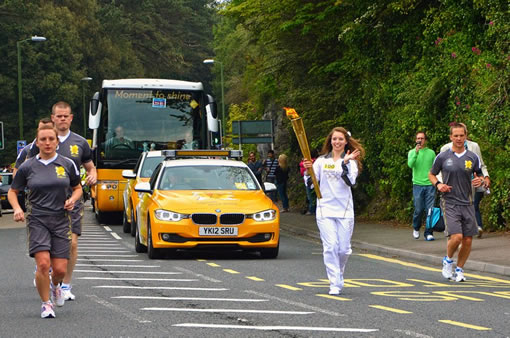 Picture taken as the torch passes the Palace hotel in Torquay.

Sunday 20th May 2012- Looking forward to the Olympics.

Torbay Council is offering a “park for a pound” promotion on Sunday 20 May, the day the Olympic Torch comes to the Bay.

People arriving in council car parks along the torch’s route before 1pm will be able to buy a ticket for just £1.

Meanwhile, the council has also announced its traffic management plans.

Cllr Robert Excell, Executive Lead for Safer Communities and Transport, said: “Excitement is mounting in the run up to Sunday the 20th as well as the various Jubilee events a fortnight later. We are anticipating that thousands of people will turn out, not only to cheer Olympic Torch and runners on their way but also to enjoy the family fun day activities being staged on Torre Abbey Meadows.

“We want people to turn up early, and the £1 parking promotion before 1pm will encourage people to do just that.

“The council and the police have carried out detailed planning in order to make sure the day’s activities run smoothly and are a great success.

“However, in order to achieve this we will be implementing a traffic management plan.

“This will involve a rolling road closure plan along the route. We expect roads to be very busy and we must advise road users that they can expect some delays.

“Everything will be done to keep inconvenience to a minimum, and roads will be re-opened as soon as possible after the torch has passed through.

“We are keen to make everyone aware of the timings of the Olympic Torch route, and we would ask road users to be patient, or to avoid the route if they do not wish to see it.”

The management plan involves preventing traffic going on to parts of the route at various times. Traffic that is travelling in the opposite direction to the torch will be able to carry on.

Key locations along the route include Tweenaway Cross in Paignton and Torbay Road along Torquay seafront.

The torch is scheduled to arrive at the busy Tweenaway Cross junction at 3pm. Traffic will be stopped from about 2.55pm, and it will be allowed to start flowing again after the torch convoy has passed through. However, traffic is expected to build up, and it is likely to take a little while to get back to normal.

With family fun day events taking place on Torre Abbey Meadows on the Sunday afternoon between 1.30 and 5.30pm, Torbay Road will be closed between Wheatridge Lane and Belgrave Road from 3.30 up to about 6pm. The torch is due to arrive at Torre Abbey Meadows at 3.40pm.

The torch is due to start its journey through Torbay at 2.40pm from the filling station at Newbarn Farm, Totnes Road, Paignton.

It will set off again from Torre Abbey Meadows at 4.30pm.

Other locations along the route include the Pavilion at 4.40pm, the Clock Tower at 4.45pm, Ilsham Road junction in Wellswood at 4.55pm, the Palace Hotel at 5pm, and Reddenhill Road at 5.10pm.

More Olympic Torch route details, and information about other events in the Bay, can be found on Torbay Council’s website at www.torbay.gov.uk