Ever heard of “Nowhere Island”. An artistic venture with some moral pointers and a sizable population, being dragged by a tug around the country down from the Arctic. This photo was taken on August 6th 2012, from a Finnmaster 6400MC. 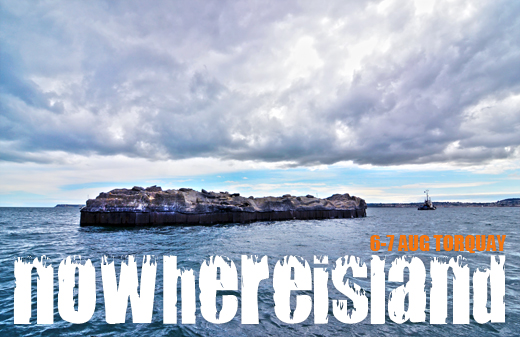 Nowhereisland is an art project by artist Alex Hartley which began with a simple idea – “What if an Arctic island travelled south as a visiting island during the London 2012 Olympic Games?” The island from the Arctic will arrive in Weymouth for the sailing events on 25th July, before continuing on its journey around the South West coast over summer 2012, stopping at seven other ports and harbours as a visiting ‘island nation’.

On its journey from the Arctic the island passed through international waters, whereupon it was declared a new nation – Nowhereisland – with citizenship open to all.

What is the Nowhereisland Embassy?

The Embassy is a remarkable mobile museum packed full of intriguing objects and information on the story of the island and hosted by the Nowhereisland Ambassadors. The Embassy will accompany the island on its journey and is one of the best places from which to view the island in each of the ports and harbours. Here you can find out more about the project, ask questions and get involved in activities. It is also the site for events such as welcome ceremonies and workshops.

Where and when can I see Nowhereisland?

You can see Nowhereisland at many points along its journey from 25th July to 9th September 2012. To be sure of a good view, head for one of the agreed mooring points at ports and harbours around the south west coast. Yellowbrick tracking are helping us with tracking the journey of the island website as the journey is underway you will also be able to find our secret, unannounced places including coves and beaches along the way.

Will people be able to visit the island?

Nowhereisland will be moored some distance from the land. You will always see Nowhereisland off-shore from a distance, perhaps on the horizon or in relation to other forms of coastal landscape. There will not be any activities or structures on the island, but celebratory events and activities will be held on the land in the vicinity of the Embassy.

Where does Nowhereisland come from?

In 2004, artist Alex Hartley discovered an island in the High Arctic archipelago of Svalbard, whilst on the Cape Farewell expedition. The island revealed itself from within the melting ice of a retreating glacier and Alex was the first human to ever stand on it. In September 2011 and with the permission of the Governor of Svalbard, the island territory was sailed into international waters north of Svalbard. Once in international waters, Nowhereisland was declared a new nation on 20th September 2011, before its journey to the South West.