The sweeping slopes of Homeyard’s Botanical Gardens give bewitching views of the world below. From the top of Mrs. Homeyard’s gardens you can admire the Teign Estuary, or peer over the river to Teignmouth town, as well as appreciating the beautifully rugged Jurassic coast. These absorbing hillside landscapes attract photographers such as Terry J Hurts year on year. 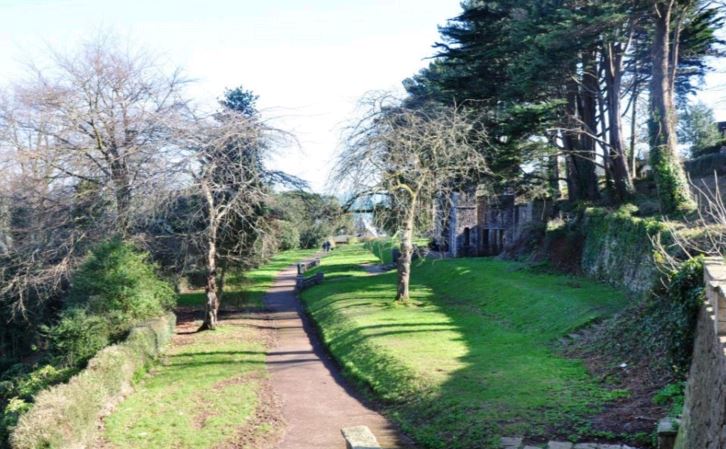 The gardens themselves are saturated with personal history, as the gardens were a project taken up by Maria ‘Laetitia’ Kempe Homeyard shortly after her husband’s death in the late 1920s. Mrs Homeyard desired a ‘pleasure ground’, and commissioned Thomas Rider of Southwark for its construction. The project provided work for unemployed shipwrights, specialist stonemasons and twelve gardeners.

Maria’s husband, William Newcombe Homeyard, was the inventor of Liquifruta cough syrup, (said to treat anything from whooping cough to bronchitis), and it is believed that the couple often brought workers from the factory on holiday to Shaldon with them. It is not surprising then, that Mrs Homeyard chose the imposing hills above the village for her garden.

In its heyday, the summer house was regularly frequented. Mrs Homeyard would entertain friends with tea and leisurely games of bridge in this dainty castle folly. Although the lead roof was stolen years ago, remains of the weather vane and flagpole can still be seen. The adjoining garden was an informal terraced arboretum which is characterised by the level walk along its upper side. This corner is home to a variety of unusual trees such as majestic Weeping Beaches, a Maidenhair Tree, Tulip and Dawn Redwood trees. It is said that 365 different species of tree were originally planted here, but only the select few survive.

The castle ruin is not the only enticing feature. The witch’s cave, a small grotto made of Torquay limestone, is said to be where ‘Old Mother Gum’ comes down from the woods at dusk to take tea. Perhaps less enigmatic, the Pond and Rill flows down through a series of three smaller ponds, finishing in a larger pool. Back in Mrs.Homeyard’s time, this would have been stocked full of huge ornamental Japanese goldfish. Finally, the Italianate garden that was designed by William Sears features classical baulstrodes. The disused gardener’s hut is now a regular haunt for bats and swallows, whilst the remains of a rose bower have recently been discovered. The garden also houses a memorial bench and table that Mrs.Homeyard erected in honour of William.

There is an on-going programme to restore the garden to its original state, led by the Friends of the Botanical Garden. The friends often volunteer at Homeyard’s and their blog publicises upcoming events, as well as unearthing authentic pictures of the garden in its former glory. For more insight into Maria’s creation, visit www.shaldonbotanicals.wordpress.com

There was no heir to inherit the gardens following Mrs.Homeyard’s death in 1944. Eventually it was sold to Teignmouth Town Council for a nominal sum, and today visitors can access the gardens for free. Multiple pedestrian entrances are available, but the pergola entrance at the east of the grounds is the most accessible. Roadside parking is also available. The gardens themselves are situated 250m south east of Shaldon and are open all year round.

Whether for a wintry wander or for the annual Summer Picnic in the Gardens, a trip to Maria’s secret garden will not underwhelm.